The city of Kiruna is partly located on the hangingwall side of the LKAB Kiirunavaara Mine. In the long-term perspective, it is not possible to have any residential buildings or infrastructure within the fracture zone and cave zone resulting from mining. An urban transformation process for the Kiruna city center is thus currently underway. The current prognosis is empirical based on observations since the early 1960s until today. However, in the Sjömalmen (Lake orebody) area (the northern portion of the orebody), mining started quite recently. This portion of the orebody is non-daylighting with mining under a cap rock. Existing prognosis tools thus needs to be supplemented with numerical modeling approaches.

The model results were evaluated in terms of surface cratering, the location of the environmental criterion limit on the ground surface and the limit angles for the environmental criterion. The results show a steady growth of the cave crater with deeper mining. Ground deformations are not arrested by bulking and/or increased confinement with depth. Future mining will likely lead to continued caving and ground deformations to, at least, the same extent as experienced so far. However, for the northern part (tip of the orebody), the model indicated limit angles, which are steeper than those currently used for prognosis. 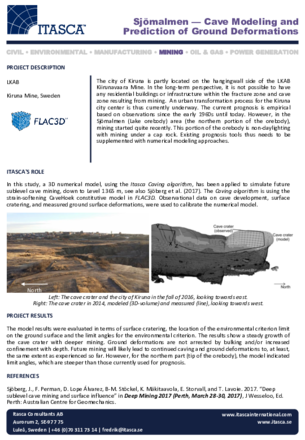